Dan Owsen. I guess what I'm wondering is if you have players who don't do "work" on the game or their characters from the end of one session to the start of the next, does it still work?

Or does it really expect the players to be thinking about the game between sessions? William Hostman. I've been Banished to Oregon Gaming in Corvallis, living in Alsea Need gamers willing to try new things The overarching conflict was removed in 4th ed, but was present in 3rd The encroaching Aura of Reason in the cities.

Since Reason suppressed faeries, clerics, magi, and demons alike, it was the one thing all fought against. Likewise, the conflicts of Church vs Wizard and Demon vs Wizard are quite present in 3rd and 4th The Fey vs Wizard is less obvious For Fey and Wizard are not disadvantaged in each others' aura-posessing areas, especially regio. Atlas' was the same content, merely a different printing with a new logo on the back cover Eric Jome. How much would you say the system relies on all the participants being diligent to track time, level up their magi, and set new objectives for their characters between sessions?

For a game so steeped in the real world and its history, what's been done to expand this game to cover other regions of the world or other time periods? Could you port it to the modern world or dial it back to Roman times? Black Death by Thomas M. Mythic Places by Carl Schnurr. Medieval Bestiary by Tim Carroll. More Mythic Places by Richard Thomas. The Order of Hermes by Jonathan Tweet. Tales of the Dark Ages by John Nephew. The Sorcerer's Slave by Thomas M. Trial By Fire by Thomas M. Festival of the Damned by Jonathan Tweet. 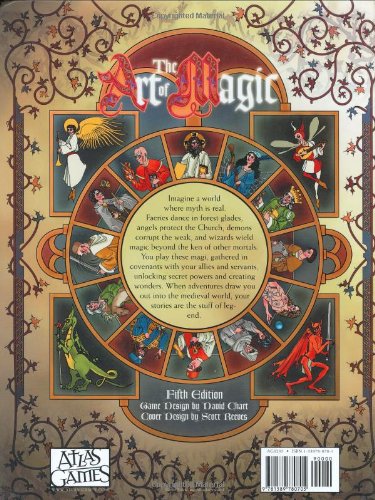 Present Over Perfect: Leaving Behind Frantic for a Simpler, More Soulful Way of Living

Setting another pseudo-historically accurate depiction High Middle Ages Europe but time so makes totally unique. Through the Aegis - Developed Covenants. A roll of '0' is also re-rolled more than once in cases of especially hazardous activity as a Botch roll. Book Description Atlas Games, With its excitement filled, strategy oriented, full-throttled action, The Challenge is sure to become a classic.

Kabbalah: Mythic Judaism by Jeremiah Genest. Return of the Stormrider by Spike Y.

The Dragon and the Bear by Simeon Shoul. Ordo Nobilis by Michael de Verteuil. The Mysteries by Adam Bank. Land of Fire and Ice by Mark Shirley.

Houses of Hermes by Jonathan Tweet. Lion of the North by Roderick Robertson.